International Migratory Bird Day events are gearing up for spring migration as more and more birds make their way towards breeding grounds. Check out events and festivals in your area. Many birds are still in South and Central America at their wintering sites, but numbers have been increasing at staging and stopover sites along northbound migratory routes. You can join this year’s IMBD conservation theme “Migratory Stopover Sites: Helping Birds Along the Way” by including resources and event materials in your IMBD event.

Aruba is known for its beautiful powder-fine white beaches, calm clear water, beautiful sunny weather (almost) every day of the year, and spectacular sunsets. These are the perfect ingredients for Aruba’s main economic source: tourism. Consequently the image

many people have of Aruba -whether having visited Aruba or not- are the blue waters, the luxurious shopping centers, fine restaurants and swinging nightlife. This was exactly the same image I had when I moved from the Netherlands to Aruba in the mid 90’s. However, shortly after my arrival I discovered Aruba has much more to offer; one of its relatively unknown features is its diversity in wildlife-both on land and in the water, magnificent fauna, stunning landscapes and peerless moonrises. Around 2012, inspired by others, I started to take pictures of those moments that most of us do not get to see when in Aruba. Not images of the beaches, the malls, the casinos, but photos taken in the middle of nature. For me, the birds carry a special place in my heart.  Now, most of my time spent outside is with observing and photographing birds.

During the past few years birding became more than a hobby…now it’s closer to an obsession or addiction. Sometimes I even think it is a disease, since I infected my youngest son too. He is as enthusiastic as I am and he joins me whenever he can. Together we volunteer for Aruba Birdlife Conservation, a very active foundation which is currently fighting for the protection of sensitive nature areas against construction and further development. The efforts seem to be successful as Aruba’s Prime Minister recently promised that 16 proposed areas and a marine park will become part of our national park Arikok. This will protect important areas for breeding birds, as well as stopover habitat for the many landbirds and shorebirds that touch down on Aruba for a rest during their northward migration.

Spring migration is about to start! In a few weeks we will have hundreds if not thousands of barn swallows in the air. The smaller and larger shorebirds are starting to arrive and in order to continue their trip to their breeding grounds.

Some of them will stay to breed; e.g. no less than 10 tern species (amongst the Brown Noddy and the Cayenne tern) stay in Aruba to lay their eggs, which makes us a unique place in the world. But we also have visitors from South America, like the Southern Lapwing and Scarlet Ibis. Although we are a small island, the amount and diversity of migratory birds and the continuous movement keep amazing me.

Environment for the Americas is highlighting stopover sites throughout the Western Hemisphere as part of the IMBD conservation theme. Would you like your unique stopover site to be highlighted on our blog? Please email Laura Koloski directly at [email protected] for more information. 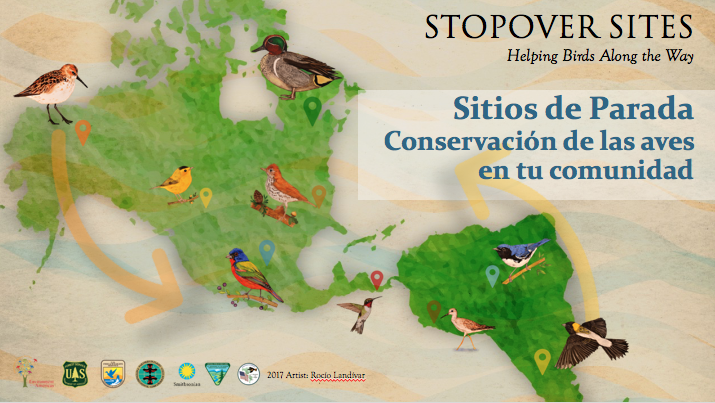