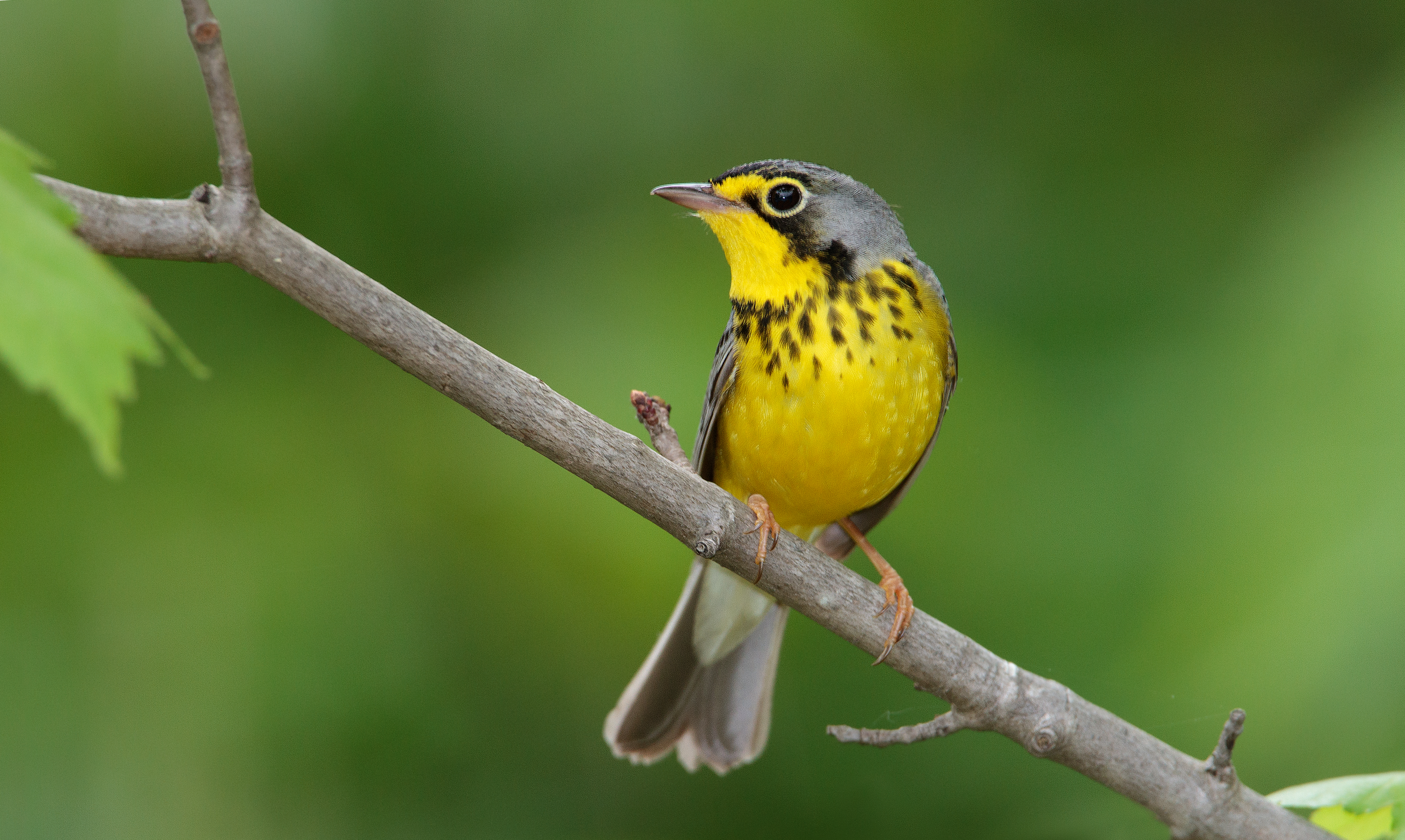 North America’s boreal forest hosts a wide diversity of organisms, including the billions of birds that rely on it for breeding and stopover habitats. Dr. Jeff Wells, Science and Policy Director with the Boreal Songbird Initiative, shares key areas for migrating birds in this IMBD Guest Blog. The Boreal Songbird Initiative is  dedicated to education and outreach about the importance of the boreal forest to North America’s birds, other wildlife, and the global environment, and is an International Migratory Bird Day Program Partner.

In late spring and early summer, North America’s Boreal Forest sheds most of its snowpack and transforms into a diverse landscape of green forests, shining lakes and rivers, and shrubby peatlands bursting with bird song.

Nicknamed “North America’s bird nursery” to reflect the billions of birds and 300+ species that nest there, this vast forest is also an incredibly important region for many birds to rest and refuel en route to breeding grounds in the northern reaches of the forest or further up in the Arctic. 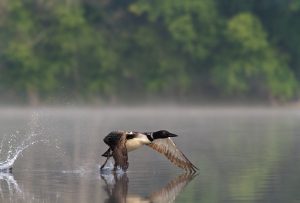 In fact, at least 29 species rely on the forest more for stopover habitat than for nesting, including Snow Goose, Brant, Tundra Swan, American Golden-Plover, Hudsonian Godwit, Dunlin, Harris’s Sparrow, and others.

For the billions of birds that nest in the Boreal Forest, the long journeys require many stopover locations not only south of the Boreal Forest but across its vast extent. A report highlighting how new technologies are reshaping our understanding of bird migration found many northern species utilizing a variety of stopover locations throughout the Boreal before making way to their eventual summer or winter homes, for example.

This adds to a growing consensus that protecting smaller, isolated parts of the Boreal will not be sufficient in maintaining its amazing birdlife in decades to come and that larger, interconnected protected areas will be needed. 1,500 international scientists and dozens of bird- and nature-based organizations support the effort to protect at least half of the forest from industrial development.

For birds and other wildlife, perhaps what most makes the Boreal Forest stand out in a global context is its combination of size and intactness: it is equal in size to the Amazon Rainforest and more than 70% of the forest remains unaffected by large-scale development to date. Habitat types can also span hundreds of miles, meaning birds have abundant options for stopover sites rather than being forced to rely on isolated patches of remnant habitat the way they do at more southern sites.

The Boreal is also where some of the largest and most innovative forest conservation efforts are taking place. Only 15% of the forest is currently protected from large-scale industrial development, but this figure is likely to rise significantly in coming years if boreal-specific conservation commitments by provincial governments are upheld and if momentum behind modern conservation approaches such as Indigenous-led land use plans and Indigenous Guardians programs continues to grow.

With this in mind, we take a look at several important migratory stopover regions in the Boreal that have been recently protected, will likely soon be protected, or are in need of better protection.

With more than 2,000 shallow lakes and ponds interspersed throughout, this wetland wonderland attracts an enormous abundance of waterfowl each summer (300,000+ individuals). However, this number swells prior to migration as additional birds, especially Barrow’s Goldeneye and Canvasback, congregate to molt and feed.

The region has been designated as both a Ramsar Wetland and an Important Bird Area. The southern portion of the Old Crow Flats was protected under the Vuntut Gwitchin Final Agreement while the northern portion was included as part of the larger Vuntut National Park, created in 1995.

The northernmost of North America’s large lakes, these twin blue titans provide critical habitat for waterbirds en route to breeding grounds further north. A portion of Great Slave Lake called the North Arm (an Important Bird Area) is especially important in providing some of the first open water for waterbirds during late springs, attracting up to 100,000 individuals and more than 25 species during May in some years. Great Bear Lake is considered the least polluted large lake on Earth and similarly provides important stopover habitat for waterbirds like Pacific and Common Loons, Surf and White-winged Scoters, Parasitic Jaegers, and Red-necked Phalaropes migrating further north and as staging habitat during fall. Thousands of landbirds move through and feed along its shores during fall migration, including Yellow-rumped Warblers, Orange-crowned Warblers, Blackpoll Warblers, Lincoln’s Sparrows, Savannah Sparrows, White-crowned Sparrows, and Lapland Longspurs feed and migrate in throngs along its shores

The Lutsel K’e Dene First Nation is in the process of turning a large portion of the Great Slave Lake’s watershed into a network of protected areas called Thaidene Nene, and on Great Bear Lake the Dene community of Délınę has protected each of the lake’s large peninsulas (Saoyú-ʔehdacho) and recently enshrined its watershed as a UNESCO Biosphere Reserve.

Two major rivers converge in the Peace-Athabasca Delta to make it one of the largest freshwater inland deltas on Earth as well as a haven for migratory birds. It is most famous for providing the nesting habitat of the last wild migratory flock of Whooping Cranes in the world, but it’s also an essential place to rest and fuel up for birds that breed further north—records note as many as 400,000 waterfowl during spring migration and occasionally exceeding one million during fall, and many songbirds pass through the area as well. Its northern location attracts birds from all four major North American flyways.

Another region that is both a Ramsar Wetland and Important Bird Area, the majority of the Peace-Athabasca Delta is protected as part of Wood Buffalo National Park—Canada’s largest—but concerns about water levels and quality remain due to industrial development further downstream. 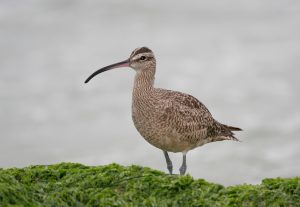 Two massive freshwater inland deltas separated by a small, narrow channel combine to make the Saskatchewan River Delta North America’s largest as well as an Important Bird Area. More than 200 bird species rely on the Delta, with hundreds of thousands of birds descending down to rest and refuel in the region during spring and fall migration. Waterfowl originating from all over Canada’s northern Boreal and Arctic regions pass through the region, and it is an important pit stop for many Sandhill Cranes that breed further north (counts have numbered in the thousands during migration).

Much of the Delta on the Manitoba side of the border is sustainably managed under the Saskeram and Tom Lamb Wildlife Management Areas, although some extractive uses are permitted there. In Saskatchewan, most conservation work has involved negotiations with forestry companies to make critical caribou habitat off limits from further logging, but the majority of the region remains unprotected from industry to date. 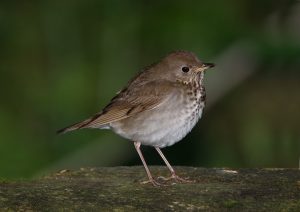 One of the last remaining large expanses of intact habitat in the southern third of the Boreal Forest, the region—the name of which fittingly translates to “the land that gives life” in Ojibwe—is an important stopover for birds that use the oft-traversed Mississippi River Flyway. Millions of birds that breed across northern Canada converge at Pimachiowin Aki as they make their journeys north in spring and south in fall, including Canada, Cape May and Bay-breasted Warblers, Gray-cheeked and Swainson’s Thrushes, and White-throated and Lincoln’s Sparrows.

Several First Nations, whose origins in the region date back thousands of years, have joined together to establish Pimachiowin Aki as a UNESCO World Heritage Site. If the proposal is accepted, it would become Canada’s first Site designated under both cultural and natural categories.

One of the three largest wetland-dominated regions in the world, this stunning matrix of peatlands, lake, ponds, and free-flowing rivers attract enormous numbers of birds during spring and fall migration, particularly along the coast. Shorebirds and waterfowl are especially dependent on the region for stopover habitat given it is one of the first (or last) opportunities to rest and feed before crossing Hudson Bay. Unusually large counts of R 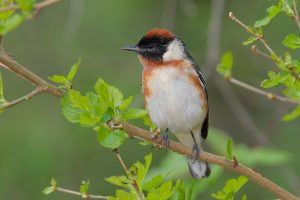 ed Knot, Hudsonian Godwit, Ruddy Turnstone, Black Scoter, and Lesser Snow Goose have been documented, and Whimbrels have been tracked via satellite stopping during migration. The region is certainly also critical stopover habitat for many songbirds although this has only begun to be better documented. However, coastal locations like Churchill, Manitoba are known to host large numbers of landbird migrants including Blackpoll Warblers, Savannah Sparrows, Harris’s Sparrows, Snow Buntings and many others.

Much of the region could eventually become protected through conservation commitments to protect at least half of northern lands in Ontario and Quebec, but to date most of the Lowlands remain open to future industrial development. Many Indigenous governments have or are working to develop watershed-based protected areas in Ontario, Manitoba, and Quebec.

These adjacent spectacular landscapes not only provide a variety of mixed habitat types for landbirds during migration such as American Tree Sparrows, White-crowned Sparrows, Lincoln’s Sparrows, Blackpoll Warblers, Yellow Warblers, and Northern Waterthrushes, but the pristine waters that carve their way down to the coastline carry nutrients to support some of the healthiest estuaries found anywhere on the Atlantic Coast. Threatened species like the eastern population of Harlequin Duck rely on the region for stopover habitat, as well as other coastal migrants like Long-tailed Ducks and Black Scoters.

In 2010, it was announced that this region would be slated to be conserved through the establishment of two adjacent protected areas, Mealy Mountains National Park Reserve and Eagle River Provincial Waterway Park. In 2015, Mealy Mountains officially became eastern Canada’s largest national park, while planning to formalize the status of Eagle River continues.

Environment for the Americas is highlighting stopover sites throughout the Western Hemisphere as part of the IMBD conservation theme. Would you like your unique stopover site to be highlighted on our blog? Please email Laura Koloski directly at [email protected] for more information.
International Migratory Bird Day events are gearing up for spring migration as more and more birds make their way towards breeding grounds. Check out events and festivals in your area. Many birds are still in South and Central America at their wintering sites, but numbers have been increasing at staging and stopover sites along northbound migratory routes. You can join this year’s IMBD conservation theme “Migratory Stopover Sites: Helping Birds Along the Way” by including resources and event materials in your IMBD event. 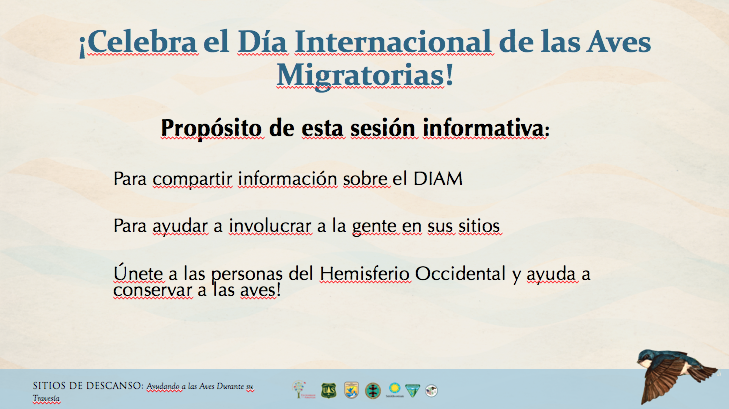 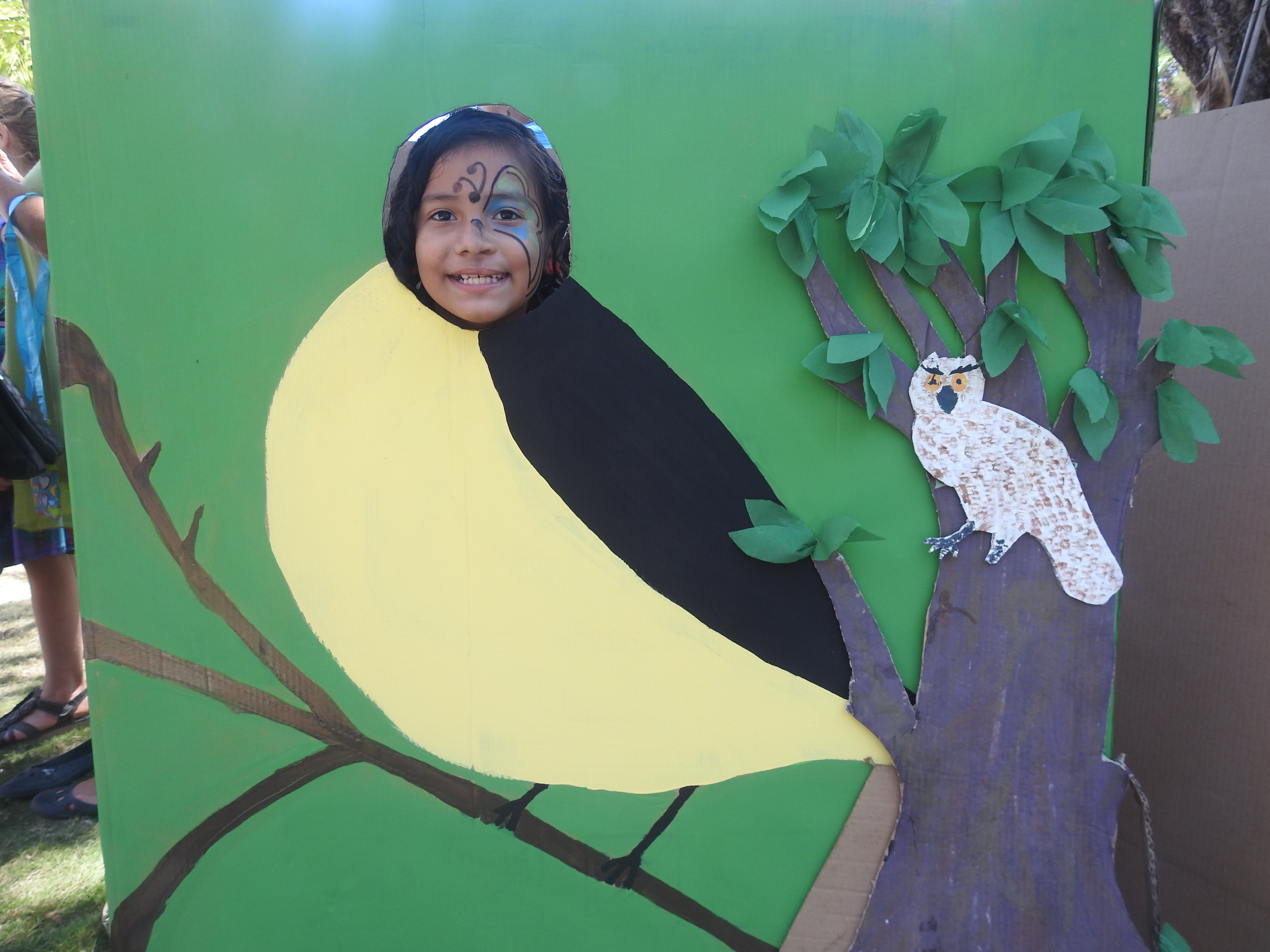 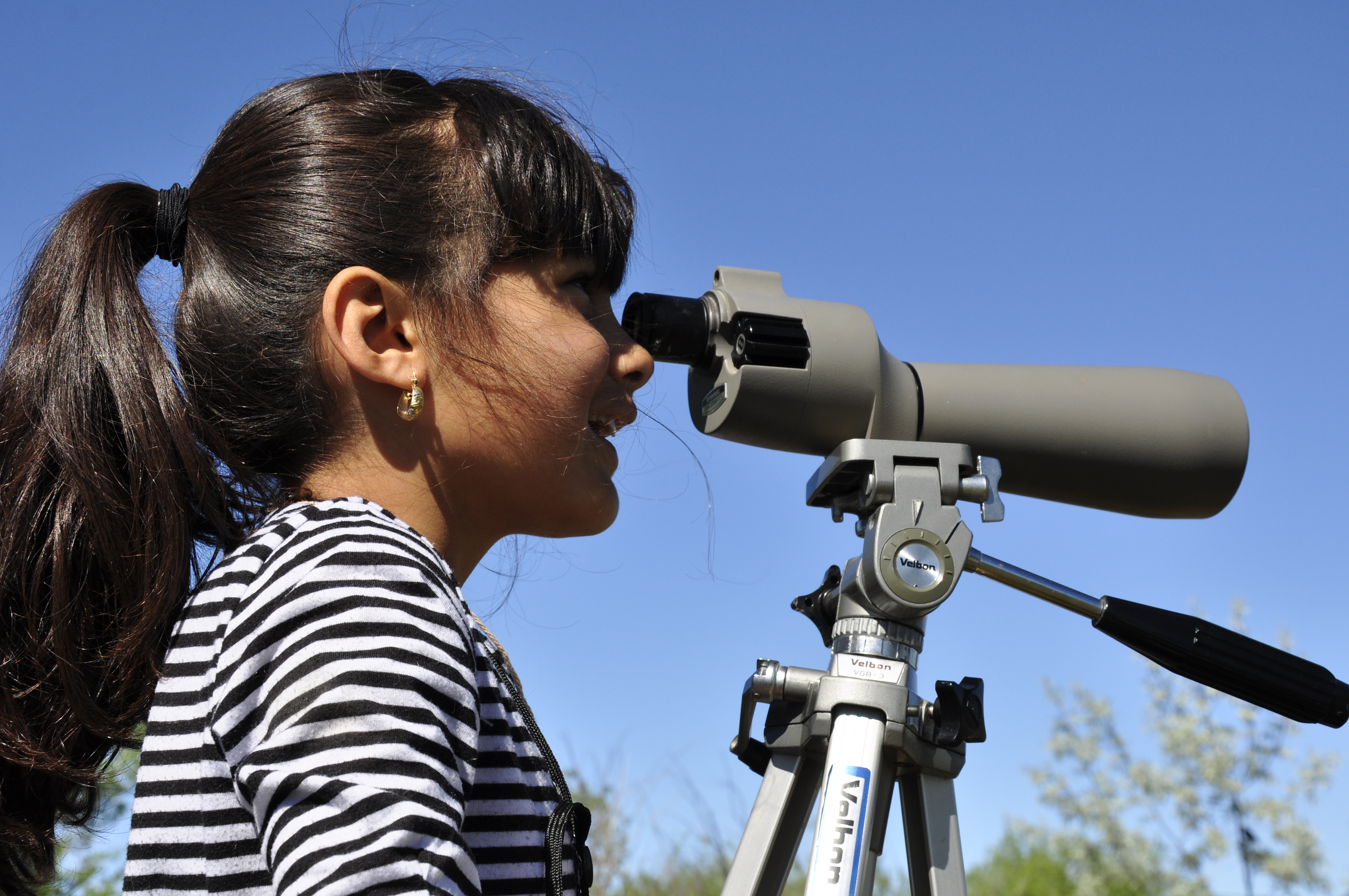